Continuing with our “back to basics” classes, we had a look at heart blocks—their cause, treatment and clinical significance.
We discussed first degree, second degree—Mobitz type I (Wenkenback) & Mobitz type II, third degree (complete), left and right bundle branch blocks.
A block is a disturbance, or slowing, of electrical activity and is seen as an elongation of a portion of the ECG i.e. long PR, wide QRS, long QT.
It is important to remember that ECGs are the electrical impulse of the heart and that a mechanical response is not guaranteed.

The ECG above shows sinus rhythm, or pulseless electrical activity (PEA). A pulse check can identify second degree heart block—as this will be a regularly irregular rhythm. It also allows for quick identification of critically unwell patients—no palpable radial pulse, or those with AF—irregularly irregular pulse.

Athletic training and increased vagal tone may cause a first degree block and there is little to be done. Iatrogenic causes include beta and calcium channel blockade, digoxin, amiodarone and medication that reduces potassium—such as furosemide. This may require adjustment of medication. Mitral valve surgery and myocarditis may result in a first degree block. With the minimal clinical risk of the block it is unlikely that this would be viewed as a reason to withhold mitral valve surgery for those patients who require it. Myocarditis requires treatment and once treated hopefully will resolve a first degree block.

A Mobitz type II block is usually caused by a failure of the His-Purkinje system due to structural damage. Approximately 75% of Mobitz II blocks fail distal to the bundle of His resulting in a wide QRS complex on the ECG, however there may be a narrow QRS for more proximal failure.
There is a significant risk of progression to complete heart block requiring careful management. The risk of asystole is approximately 35%. Management is likely to require hospital admission onto a ward offering a monitored bed—or telemetry, temporary pacing and a permanent pace maker.

A third degree, or complete heart, block is shown by dissociation of the P and QRS complex. With regular P waves—resulting in a constant PP interval, and regular QRS waves—resulting in constant RR interval, however there is no association between the P and QRS. The QRS complex is generally wide as it is likely to be generated below the bundle of His. The lower down the conduction circuit the impulse is generated the slower the impulse will be. 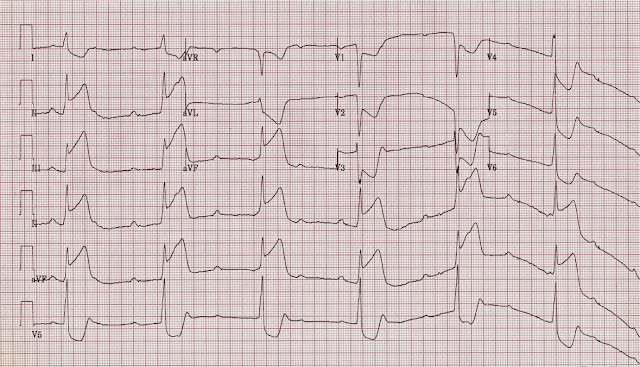 Complete heart block is caused by progressive failure of the cardiac conduction system. This is the end point for a second degree block that progresses. There is a high risk of ventricular standstill resulting in sudden cardiac arrest or syncope. Meaning these patients require a permanent pacemaker as soon as possible.

This produces a wide QRS and deep S waves in the right precordial leads and a tall R wave in the lateral leads.

A LBBB likely has an organic cause, such as: aortic stenosis, ischaemic heart disease, hypertension or fibrosis of the conducting system (Lenegre disease) or a previous MI—particularly anterior.
Current NICE guidelines suggest that an adult with chest pain and a presumed new LBBB should be considered for pPCI. There is some debate in more recent research as to the benefit of PCI for new LBBB, however given the risk of an anterior MI being the cause I support NICEs view that pPCI is worth considering.

RBBB tends to be caused by chronic conditions, although it may be temporarily caused by myocarditis or pulmonary embolus. Other causes are: ischaemic, congenital and rheumatic heart disease; cor pulmonale, cardiomyopathy and degeneration of the conduction system.
As RBBB tends to be the result of a chronic condition, meaning the condition tends to gradually become worse, a RBBB is less likely to compromise the patient. In terms of treatment that means many people will not require treatment for the RBBB, they may need treatment for the underlying condition.