Welcome!
If you are new to @ECGclass, before we start, you may like to read this brief explanation of what it's all about: #ECGclass and how it works.
Each 'term' is spilt into 5 cases, launched a 2 weekly intervals.
So here goes with the next case of this term!
This weeks case is brought to you by Sy.

This is a case for everyone it could be an out of hours call, walk in centre, GP surgery, ambulance or emergency department.

History: A 35year old female brought in by a friend/seen at home. She report increasing pain in her back and shoulders for the past two days.
Past medical history: fibromyalgia, asthma
Drugs: Amitriptyline (25mg ON), Paracetamol (1g QDS), Zomorph (10mg BD), Salbutamol inhaler (PRN).
Social: Lives alone.
On examination: The patient is lethargic & dizzy, and responding to verbal commands
Sats: 93% on air
Resps: 18. Equal bilateral chest expansion with slight bilateral wheeze
Pulse: 100 regular
BP: 95/50 both arms
Good colour
Central capillary refill time = 3 seconds
Temp: 36.4
Neuro: GCS: 13 (E3, V4, M6). Our patient is responding to voice. No lateralising signs.
Pupils: Equal 4mm round and react to light
Glucose: 4.8
This is a young person with hypotension, tachycardia and a mild tachypnoea as well as an acutely altered mental state. This is an unwell person requiring close monitoring and urgent attention to stop further deterioration.
At this point we are unsure about what is happening so as soon as possible we would ask for general bloods, blood cultures (think sepsis as pulse>90 + acutely altered mental state ? pneumonia due to the decreased sats), ECG and a blood gas.
Given this is a blog about ECGs I’m sure you will have guessed the ECG will be the key to diagnosing this patient…

Working through the ECG

Hopefully we can all agree that there is organised electrical activity and we already know this lady has a pulse, so we dont need to start CPR.
The ventricular rate is around 100, regular and slightly widened (about 3.5 squares or 0.14 seconds). 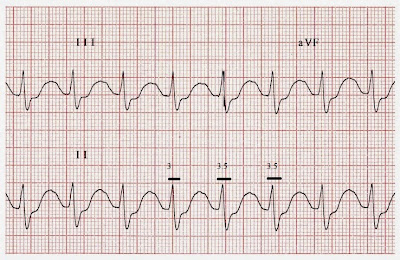 We have already asked for bloods and hopefully the gas will have come back with electrolytes on it.
This ECG shows P waves visible as a blip in the T wave Lead II and V2.

The P wave ratio to QRS complex is 1:1 so no 2° or 3° block (it is also highly unlikely that a tachycardic person has a 3° block). The Pt has 1° block, although we should compare this with old ECGs, if available, as this may not be pathological.
There is concave depression of the ST segment in all precordial leads, II, III & aVF: there is no reciprocal ST elevation. This is not necessarily something to be worried about, as concave ST depression is not usually associated with ischaemic changes; it is associated with: Right Ventricular Hypertrophy, Left Ventricular Hypertrophy, Digoxin, Hypokalemia, Mitral valve prolapse, CNS disease, Right Bundle Branch Block, Left Bundle Branch Block, Wolff-Parkinson-White (see this link on ST Segment Abnormalities)


Potassium as the main culprit of cardiac arrhythmias

We have a tendency to look at potassium as the main cause of cardiac arrhythmias, it is important not to forget the other electrolytes that alter cardiac action potentials.


Generalised electrolyte effects on the ECG

Looking through the patients drug history there are a number of drugs that could cause the decreased level of consciousness.
We have Zomorph but this is unlikely to leave a resp rate of 18 and 4mm pupils.
Salbutamol should have relieved the wheeze, but would explain the tachycardia but not the ECG.
A paracetamol overdose (OD) taken a few days ago and now presenting as liver failure could cause most of these symptoms and unfortunately it is likely to be too late for this lady. A late presenting patient with significant paracetamol OD is likely to die unless they are incredibly lucky and a liver for transplant happens to be available.
Amitriptyline (AMT) is a tri-cyclic antidepressant (TCA) and a sodium channel blocker. All TCAs are potentially dangerous if taken in OD. When prescribing TCAs for depression AMT is particularly dangerous when used to OD so amount and choice of drug should be considered. This patient is not taking AMT for depression she is taking it for neuropathic pain: pain that she has complained was worse than usual for the past 2 days...
This patient requires ICU admission due to the high risk to her airway because of the decreased level of consciousness and the likelihood of vomiting, the respiratory risk due to likelihood of seizures and a wide QRS tachycardia.
Those who look through the advanced life support tachycardia algorithm will have noted that this is a person with an unstable wide QRS tachycardia that, according to the algorithm, would initially be treated with DC cardioversion then 300mg amiodarone over 10-20 minutes then 900mg over 24 hours. 3 attempts at cardioversion are unlikely to make any difference to this person, the amiodarone may help to stabilise the cardiac action potentials, however this is one of the rate cases where sodium bicarbonate is indicated in large quantities.
Sodium bicarb 8.4% should be given in 50ml boluses until either the blood pH is 7.5-7.55, or the QRS complex narrows. As sodium bicarb can increase intracellular acidosis this is another reason for the ICU admission and close monitoring.

Inter-ventricular conduction delay and a right axis deviation.
If no bundle branch block, in a supra-ventricular rhythm, and no sign of left ventricular hypertrophy consider TCA overdose and hyperkalaemia as the most serious causes.
For once the aVR lead saves the day. An rSR' complex is suggestive of a problem with sodium channels - seen in Brugada and TCA/sodium channel blocker OD.

This is based on an incident I saw at work with a patient who had poorly controlled neuropathic pain. They had been increasingly using there morphine to control the pain, until they remembered that the AMT they were taking was also for pain. They started upping the AMT and eventually ODd and were brought into resus and then to ICU.
The patient had not discussed the increasing pain with there GP. The GP had spent a long time talking to them about the dangers of morphine in OD but had not spent so much time discussing the AMT or paracetamol.
It is important that we educate our patients about the side effects of the medication we are giving to them. This is particularly important for medication the patient will be taking at home away from our sight.
Posted by Sy at 22:41