Welcome to another weekly case on ECGclass. :)
If you are new to either @ECGclass, #ECGclass, or this blog - please click  here to find out what it's all about!

ECG class is delighted to welcome our second guest speaker of the term!

Simon can be found on Twitter @sydeveau or via his ECG blog:  Bits and Pieces from an ED Nurse
As an ED nurse, Simon has come across a variety of ECG problems in the ED.
Problems range from ED staff doing them wrong, ambulance crews querying ischaemia/ST deviation, and people being referred in with abnormal ECGs, who go on to have normal ECGs when electrodes and leads are positioned correctly.

So this weeks ECG class looks at a case of mistaken identity.
What happens when ECGs are done wrong?

Please use the Hashtag #ECGclass if joining in on Twitter!

If you want to ask the patient any questions, or request any further investigations this can  be done by the hashtag during the course of this evening.

Alternatively, if referring to this blog at a later date, please leave comments below.

Q1.      What is the correct electrode position of the precordial leads?

Q2.     What technical error does the ECG below show? 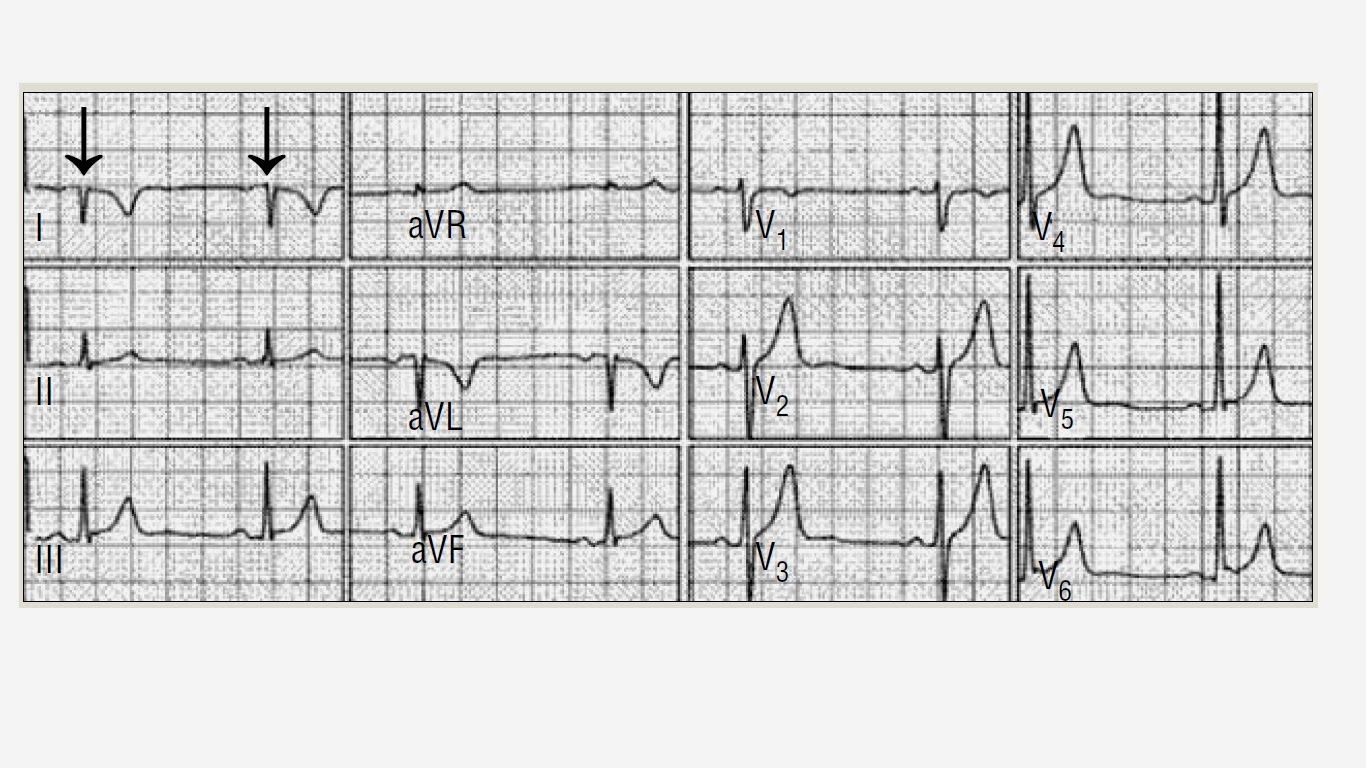 The ECG above shows leads RA & LA to be reversed.

Lead I is –ve and aVR is +ve = general R direction of cardiac impulse.
The differential diagnosis here would be right sided heart (dextrocardia/dextroposition). 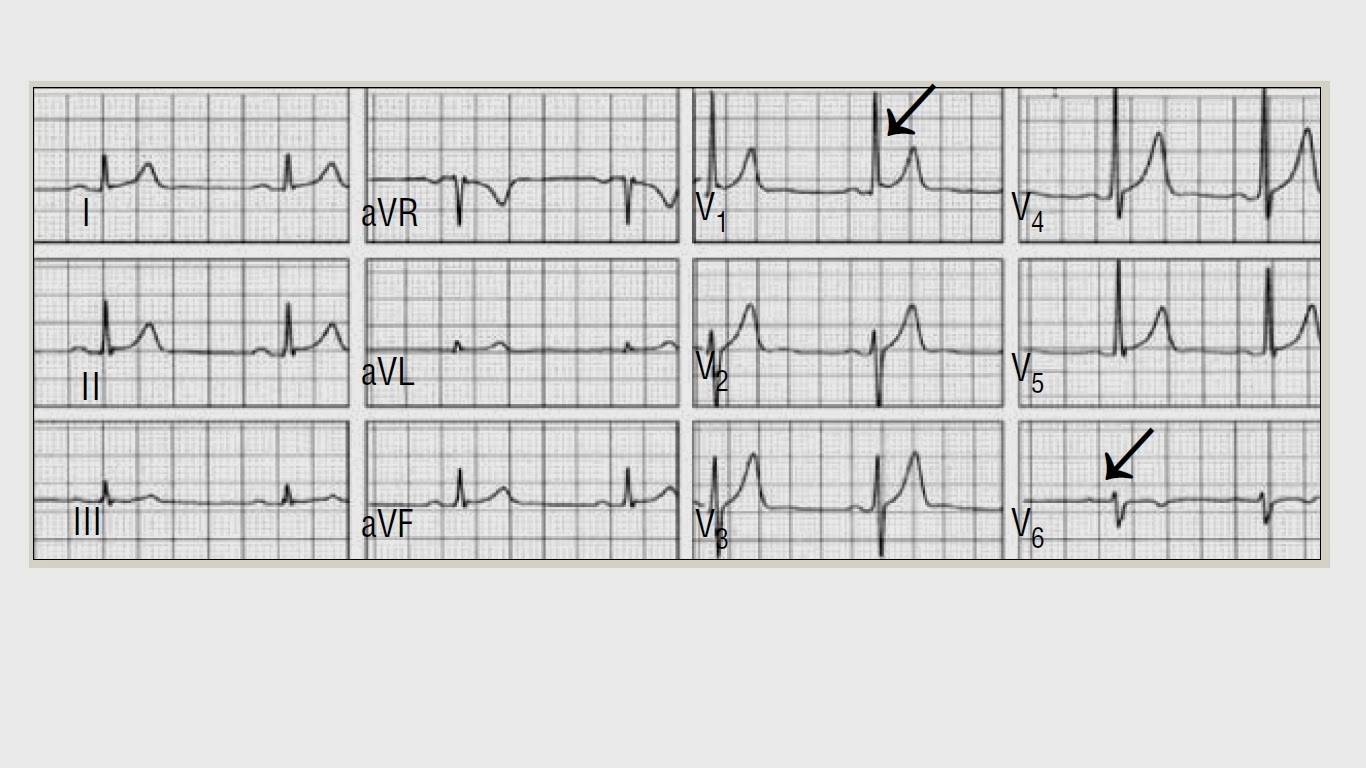 This ECG shows reversal of V1-V6.
Note the RS progression in reverse. 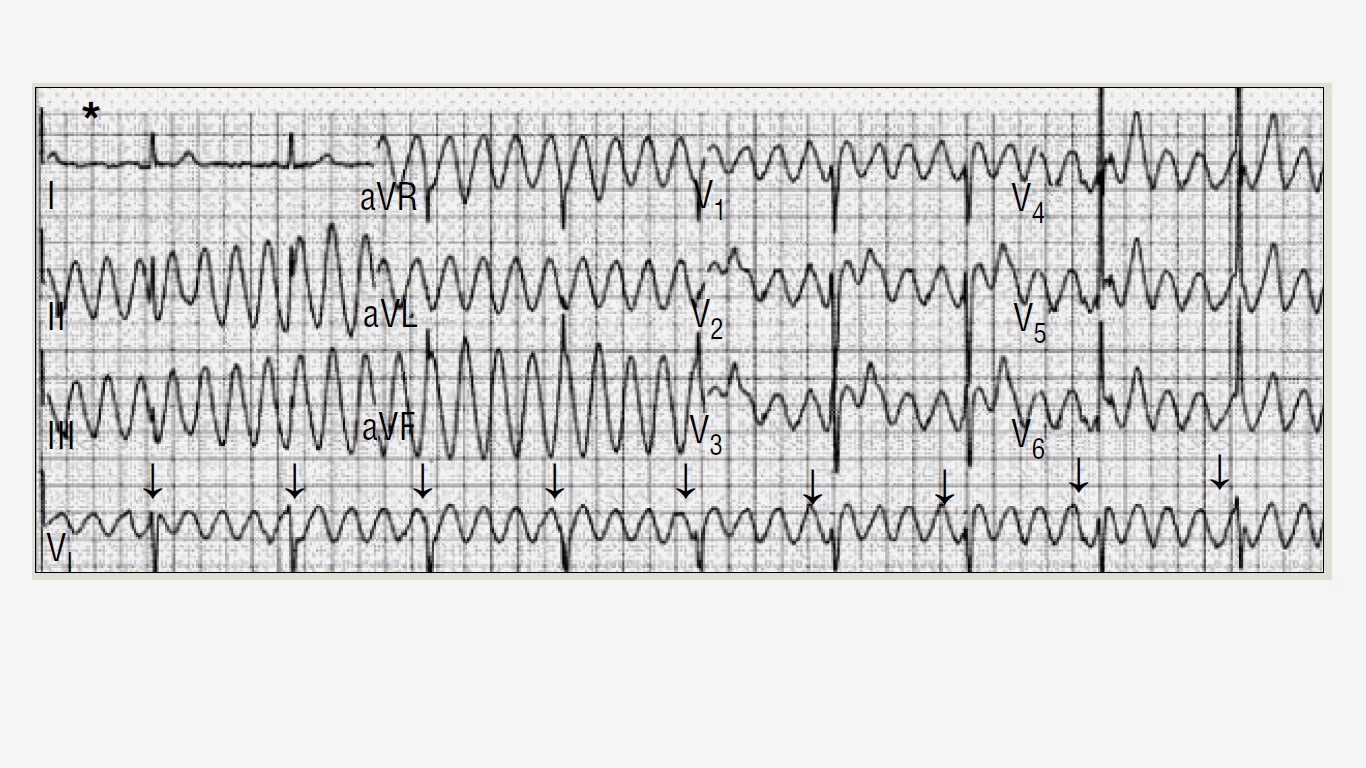 Note that lead I shows normal sinus rhythm.
Remember to treat the pt not the ECG!

This is VT artefact from movement.

Q5.    At least this one doesn’t need defibrillating, but it there correct lead placement?

Note the amplitude of lead I > II . This is always suspicious.
The P wave in Lead III has a small +ve  deflection at the end. This is Abdollah Sign
(The amplitude of the P wave in lead I greater than in lead  II and/or  a P wave terminal positive component in lead III).
Abdhollah’s sign = LA & LL reversal. 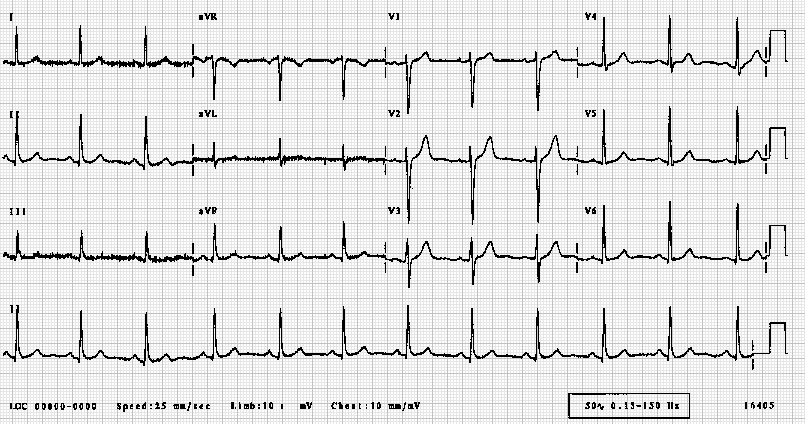 
Normal sinus rhythm!
All the above ECGs could well have come from the same patient so remember to treat the patient, not their ECG!
If ECG  looks wrong, then redo - If in doubt throw it out!

Q7.    What general rules could you use to check for correct electrode placement?

Correct placement of leads is important as an ECG captures a 180degree ‘picture’ of the
heart. This picture will be inaccurate if the leads are not ‘looking’ at the correct point. While
the majority of ECGs may be done by non-medical staff it is important that those reading an ECG can identify areas that may suggest an error in obtaining the ECG, rather than some cardiac pathology.

Colour coding is not universal.  American systems use different colours (so Ride Your Green Bike, starting with right arm and moving clockwise will not work).
Many systems have replacement clips that attach to the electrodes and these may mean that the red RA electrode has a green clip on it.

Herman et. al. (1991) in a small scale experiment found deliberate misplacement of ECG
electrodes produces ST segment changes of ≥1mm in 47% of participants, as well as other changes, resulting in incorrect diagnosis in 60% of patients.

Hill and Goodman (1987) showed that misplacement by 1 intercostal space vertically, or
15mm horizontally, significantly altered R and S wave amplitude; leading to incorrect
diagnosis of pericarditis and ischaemia and a missed MI in a single case.

Nelwan, Meij, et. al. (2001) and Madias (2006) state that body position for recording of an
ECG will change both the amplitude and axis of QRS complexes.

McCann, Kelly et. al. (2013) suggest that minimal inter-rater reliability exists, even between
“experts”. They found differences of up to 120mm in electrode placement, with greater
difference in women than men. This may be because it is traditional for precordial leads to be placed inferior to breast tissue, rather than at the ‘correct’ anatomical landmark.
As breast tissue will reduce current, therefore reducing amplitude of ECG complexes,
pragmatically placement on abdominal wall inferior to breast tissue in women produces
higher amplitude complexes.


For serial ECGs it is important they are recorded with electrodes in  the same place, as altering electrode placement may change electrical morphology and cause the appearance of altering cardiac pathology.


So there you have it.  Thanks to all who joined in!

Hope you found this useful.
Please do feedback any comments to @ECGclass or @sydeveau.

And don't forget - if you fancy leading a class - just get in touch!
'Till next week.
:)

Credit to Baranchuk and Shaw (2009) for the ECGs used in the cases above.

Baranchuk and Shaw (2009) & Batchvarov and Malik (2007) below have many examples of
lead misplacement.