A 40yrs old man comes in to see you in surgery.

On taking further history you discover his pain worse on inspiration, but also on chest wall pressure. At a glance, he looks a little unwell, and has slightly clammy skin.
You note he's an infrequent  attender, with no significant past medical history, so you guess he really doesn't feel very well.

What are you thinking?
Any more questions you'd like to ask?

He's a slim, muscular, non-smoker, on no medication.
His father had an MI aged 68yrs. No other family history of IHD or vascular disease. He's never had any bloods taken, so his cholesterol is unknown.
He's not previously reported/noted any exertional chest discomfort.

He has had a slight irritant, dry cough since his URTI, but no sputum and haemoptysis, and no history of recent travel.

On examination he's normotensive, and CVS examination is normal with normal heart sounds and no added sounds. He has a low grade pyrexia and mild tachycardia, in keeping with his reported URTI.
His peripheral O2 sats are 99%. Indeed he has costal tenderness over the anterior chest wall.

He admits he's worried about his heart.

His history and clinical appearance doesn't seem suggestive of acute coronary syndrome requiring a 999 admission, so you agree with him to get an ECG, there and then. 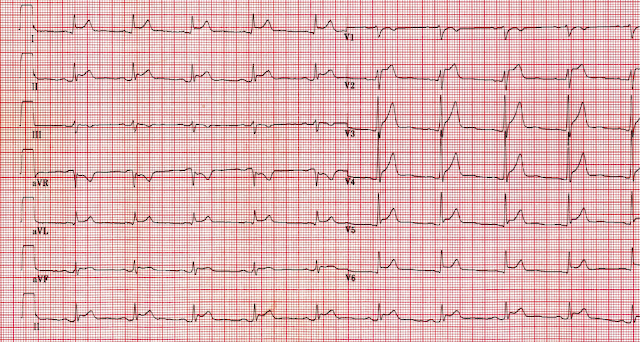 Yes. It appears to be regular doesn't it, and despite being slightly tachycardic when you examined him, his rate has settled down to around 60bpm.

P waves can clearly be seen and their morphology looks pretty normal and consistent.  There is a strange scooping seen after some of them - most notably in the inferior leads. Take a look at lead II, III and aVF - see the slight depression of the baseline between the P and the QRS waves. In contrast - this same PR segment looks to be elevated in avR.

So now to the ST segments. There is widespread (non-localised) ST elevation in all but a couple of leads (V1, III and aVR I think are spared?)
The elevation seen might be described as scooped, or saddle-backed.

So where are you at with your diagnosis?
Are there any other tests you'd like to arrange in Primary care?
Or do you think he needs admitting?

Pericarditis is a cause of ST elevation which often throws us.  As it is an inflammation of the pericardium it can lead to ST elevation in almost all leads. This is an important distinguishing feature from myocardial infarction, which has ST elevation localised to the region of infarct. MI also presents more acutely.

If faced with uncertainty, in patients who are not unwell enough to warrant admission, and in whom the chest pain history does not suggest an acute coronary syndrome, then the most helpful test to support the ECG, is a serum CRP (CRP is rarely normal in pericarditis).

Patients with pericarditis are often younger, with a lingering history of onset of symptoms, and frequently present to GP. (Some are inevitably admitted via the paramedic 999 service, having presented with chest pains and an abnormal ECG).

The chest pain is often associated with viral prodrome – such as a bad cold with aching joints. (Hence inflammatory markers are usually raised)
Longer-lasting symptoms than acute MI.
Pain can be eased sitting forward, and may be worse when laying back.


For a summary on different patterns of ST elevation you might find this previous blog link useful.

Once again, thanks to all who took part in tonights discussion, and for all your useful titbits and contributions. . As usual the whole conversation thread will be uploaded onto Storify.com in the next  week.

Posted by Heather Wetherell at 21:36

Email ThisBlogThis!Share to TwitterShare to FacebookShare to Pinterest
Labels: AUTUMN 2