The wife of this 48yr old man, called the paramedics when she witnessed his collapse at home.
The paramedics arrived within minutes, noted his complete loss of cardiac output, initiated CPR and gave 2 shocks, with return of spontaneous circulation.

The shock strip is seen below: 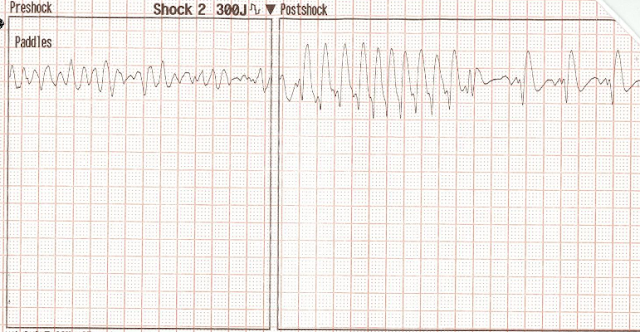 Q1. What is the pre-shock rhythm?

The pre-shock strip shows completely disorganised, chaotic ventricular activity. This is Ventricular Fibrillation (VF).  This is a life threatening arrhythmia, which is inexcusable to miss. Hope you got it!

Q2.  There are two post-shock rhythms. How would you describe the first?
(Just describe what you see.  Don't worry about a diagnosis - is it narrow, broad, regular, irregular, whats's the rate etc?)

The first rhythm on the post-shock strip shows an irregular Broad Complex Tachycardia (BCT), at a very rapid rate (300 bpm). All the complexes look similar, a bit like monomorphic Ventricular Tachycardia (VT) - but unlike VT, they are irregular (zoom in and map out, to confirm this, if you're in any doubt).
So far so good. I think this is a reasonable level of interpretation for most of us.
But, there's more detail to follow, for the advanced enthusiasts!

The second rhythm looks like a possible return to sinus rhythm (alternatively, this could be a CPR artefact - we'd need a longer strip to be sure).


Update
He was taken directly to the catheter labs at the local hospital, but his coronary arteries were entirely normal.

As his GP, you hear about his admission. His three small children attend the local school with your own. He's not someone you see very often, so you check his notes. According to your records, he was previously fit and well, other than one mention of palpitations a few years ago.  He had only mentioned these in passing. They did not worry him and rarely caused him anything more than a trivial and transient discomfort. You had advised him about caffeine intake, and work stress, but neither you nor he felt they warranted further investigation. You had advised him to contact you again, if they became more frequent, or troublesome.

Q3. What possible conditions might you be thinking about now?


Update.
Once stable in hospital, a post-collapse, resting ECG is taken:

Posted by Heather Wetherell at 22:26