I thought it might be useful to discuss the ST segment in a bit more detail.

As with any other aspect of an ECG, when you come to comment on the ST segments, just describe what you see.

As you know, ST segments can take on the following forms:

Each of these forms should then be further described in accordance with the pattern/shape they take on.

Whilst an isoelectric ST segment is usually considered the norm, it may appear slightly 'squared' off with a sharper than usual cornering effect between the baseline and the T wave.  This can be an early sign of impending ischaemia, during exertion.  It may also appear slightly 'slurred' or 'scooped'.  This scooped pattern may sometimes appear slightly depressed (perhaps only 0.5mm - half a small square).

Baseline 'slurring' of ST segments is a commonly seen normal variant in well, middle-aged women, and is a non-specific finding. These non-specific changes can make interpretation more tricky, if presenting with chest pain.

A classic example of this was seen on last weeks ECG in leads I and aVL (compare the scooped appearance seen in aVL with the nicely formed ST segment seen in the middle of the rhythm strip): 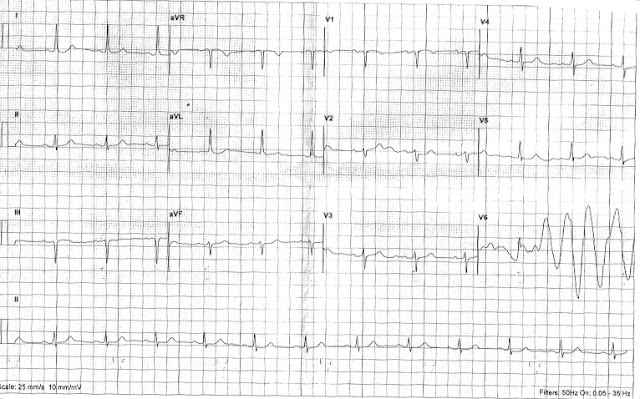 Given this lady's non-cardiac presentation, and lack of any cardiac risk factors, I would consider these ST segments 'non-specific'.

We are, hopefully, all pretty familiar with the localised convex pattern of ST elevation, which alerts us to an acute STEMI.  More detailed analyses of the acute settling changes of ACS and STEMI's are not really in keeping with this Primary Care blog, and I will leave for others to discuss. All you need to do is recognise it quickly and set in motion acute management (aspirin/GTN/999) in accordance with your local Acute Chest Pain guidelines.

Other forms of ST elevation can be described as non-localised, saddle-backed, notched, scooped and can be seen in pericarditis, left bundle branch block and high take off.

Examples of these different patterns can be seen in the July 2012's post Different Patterns of ST elevation.

ST depression is a sign of acute ischaemia, and is usually transient. This may be during and episode of chest pain, or may occur silently during exertion. The ST segments usually return to baseline once the angina/exercise episode is over. (Unless the stressor continues, or symptoms are ignored, and the patient progresses to develop a STEMI.)

Patterns of ST depression can be sub-divided into
The latter three patterns denote increasing severity of ischaemia.


Scooped ST segments with minimal , if any, depression

In men, they are less often seen as a normal variant, and their presence should raise your suspicions.

However, if seen during an episode of acute chest pain, even in women, they may be indicative of an Acute Coronary Syndrome and should be managed accordingly. See "Heart and education" 2003 article by Tom Hyde (@thecardyologist) suggesting even 0.5mm ST depression is associated with an increased 4yr mortality).

Whilst this might be the very first and early sign of progressive ischaemia, it can also be a normal feature during faster pulse rates, such as seen during exercise.
Uplsoping ST depression is often be seen during treadmill ECG's. As long as there is no progression (i.e to horizontal or downsloping ST changes) or no associated symptoms, and there is rapid resolution in the resting/recovery phase, it can usually be disregarded. 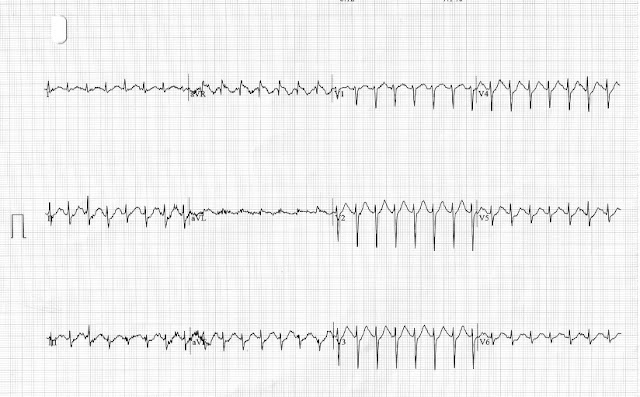 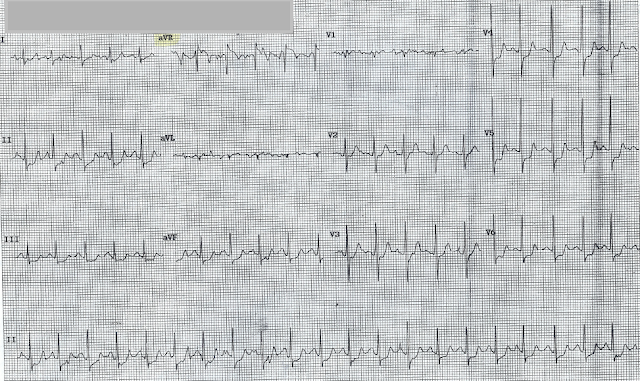 Whilst the lateral leads above show good going downsloping ST depression, the inferior leads, whilst still a little upsloping, are heading that way soon, I suspect!

This is the most advanced form of ST depression, denoting marked ischaemia.
ST depression will frequently progress through upsloping - horizontal - downsloping pattern during progressive ischaemia/exercise. Most ETT protocols dictate that the test should be stopped if 2mm ST depression is associated with symptoms, or >3mm ST depression occurs, even in the absence of symptoms. 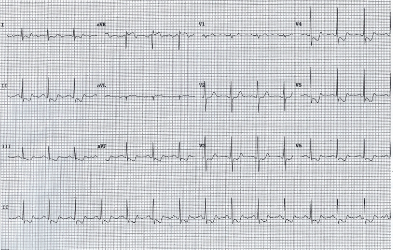 In advanced cases, the downsloping ST depression can eventually progress to cause a 'flipping' of the T-waves and thus T wave inversion is seen, before slowly returning back to baseline during recovery.


Posted by Heather Wetherell at 17:53