This 49yr old man presents to his GP with a 6 month history of chest pain.
Sometimes this is triggered by exertion, sometimes at rest. It can be prolonged, often lasting several hours and on occasions, all weekend.
He considers himself fit and active, so he light-heartedly dismisses his symptoms, and works through his 'mild' discomfort, which is very localised in the left upper chest, without radiation. He has no arm pain, no dizziness, and no breathlessness. He has only presented under duress from his wife.

He is a non smoker, with no risk factors for IHD and not on any medication. His BP is normal, as always. However, you do hear a systolic heart murmur at the left sternal edge.

You obtain an ECG below: 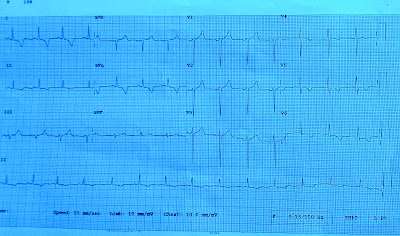 It wouldn't be wrong to admit this man, on the basis of his rest pain, and ECG changes. Given his dismissive nature, he may take some persuading, but with rest symptoms he is at risk.  You can't reassure him that nothing adverse will happen if he stays at home.

At very least, it should prompt an urgent referral to the RACPC.  In the meantime he should be started on aspirin/beta-blocker and a statin and given GTN/999 advice. The referral should include his ECG and make note of the murmur. (Note: Not all RACPC are set up with ECHO facilities, so if this information is included in the referral, an "ECHO on arrival" request can be made by the clinician receiving the referral).

In this case, an ECHO confirmed severe Aortic stenosis. As such, an  ETT is contraindicated.
He needs same day admission for monitoring, and an in-patient work up for diagnostic cardiac catheterisation.

It's not uncommon to see marked LVH with prolonged severe Aortic stenosis. The above ECG shows no voltage criteria for LVH, and we know he is normotensive.

Below is another example of severe AS, this time, causing the typical 'strain' pattern seen with LVH: 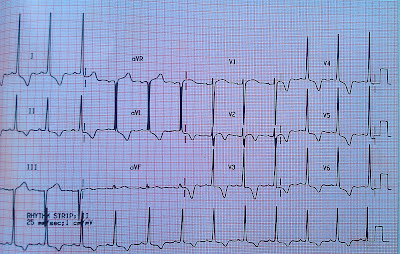 Note the similarities in the two ECG's. However, in this second example, there is gross voltage criteria for LVH (fulfilled in Leads I, aVL, V1-6). There is widespread T-wave depression, and typical of LVH,  T-wave inversion in the leads which face the left ventricle (i.e. leads I, aVL, v4-6).

T-wave inversion is also seen in leads V2 and V3.  This is suggestive of other pathology, such as co-existing coronary disease.

Lesson - Don't let the stoical nature of patients disarm you! :-)


Posted by Heather Wetherell at 21:31